Galilee Fishing for a Cause Tournament and Festival big success 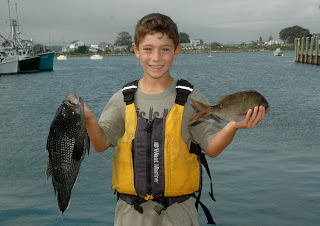 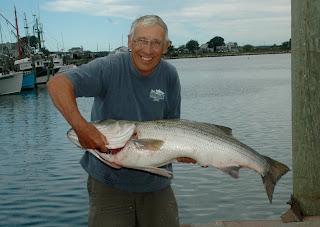 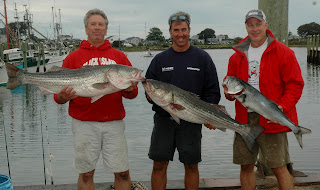 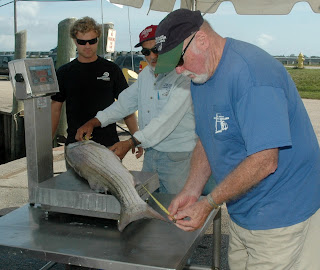 Measuring up:  This 28 lbs. striped bass caught by Andrew Raucci (left) of Wakefield, RI  gets weighed in and measured by Ed Carney, RISAA board member (right), at the Galilee Fishing for a Cause Tournament and Food Festival.

Galilee Fishing for a Cause Tournament and Festival big success

Block Island wind Farm informational meeting
Deepwater Wind (developer of the pilot wind farm project off Block Island) will hold a Block Island Wind Farm and Transmission System informational meeting and open discussion with the Rhode Island fishing community on Tuesday, October 9, 2012 from 4:00 p.m. to 7:00 p.m. at The Village Inn, 1 Beach Street, Narragansett, RI.  If you are a recreational or commercial fisherman (or anyone else for that matter) and want to learn about the project or have a concern about the proposed wind farm you should attend.  Learn about the fisheries data that has been collected and what research is proposed as the project moves forward.  For further information contact independent fisheries consultant Rick Bellavance at 401.741.5648 or www.biwffisheries@gmail.com .
Where’s the bite
Tautog fishing is heating up as anglers start to target this species.  Legal size is 16” minimum with a limit (until October 19) of three fish/day/angler with a maximum of ten fish per boat.  JR Carlow reports on the RISAA blog, “I got out with my dad on Friday for some tog. We hit the ledge at the corner of Castle Hill, right where the Coast Guard cutter comes out, if you follow the shoreline out to the front of the Inn at Castle Hill. Got nine keepers and a total of 17 fish in about 2 1/2 hrs. All on Asian crabs. Slack tide too. Took the best five home.”  I fished in the mid/lower Bay Sunday and caught many shorts and two nice keepers in the 20” range in the General Rock, North Kingstown area in a matter of 1 ½ hours,  2.5 hours before low tide.  Once the current slowed, the fish shut off. I was using green crabs, chumming with a mixture of clam bellies and green crabs.
Striped bass fishing remains strong at night and early morning at Block Island.  Fish not as plentiful as they were, but still worth the trip. Tommy Pelto reports a good striped bass and blue fish bite along southern coastal shores, “I had a great night along South County. Even with a stiff wind fishing was great and consistent. Bass and blues were all mixed in together. A black and purple bottle plug did the job. Definitely an encouraging sign… (for) the next couple months.”
False albacore, albies or little tunny as they are called are appearing in good numbers along Rhode Island southern coastal shores.  Stephen Katkowski reports, “Fished the south shore for albies on Monday in my 14' skiff.  Landed 13 out of 17 for the day fishing all afternoon.  Kastmaster XL's were the ticket for me.  Fish were in tight just outside the surfers between Deep Hole and the Ocean Mist
Offshore. The bluefin tuna bite is still on at the Mudhole.  Joey Manansala said, “We fished the Mudhole this weekend. There are still small BFT and plenty of false albacore to keep you busy.”  Roger Lema said, “We were able to catch green bonito this Saturday along with Capt. Tom Toyota and the Mark V.  Fourteen fish total… with almost uncountable albies.”

Posted by Captain Dave Monti at 5:36 AM No comments: Links to this post 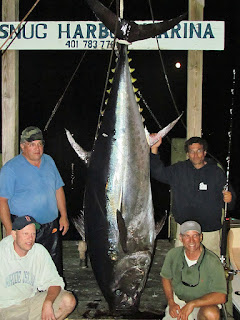 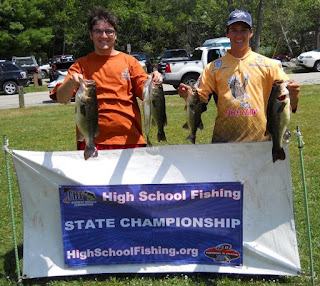 State champs: Pat Crabtree and Chris Catucci of Bishop Hendricken High School, Warwick are getting ready for the freshwater fishing High School Eastern Conference Championship in Virginia on September 15.  Pat and Chris shown here as they finished first in the State of Rhode Island with a largemouth bass five fish limit weight of 14.5 pounds.

Why fish at night? 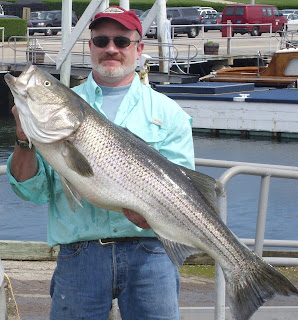 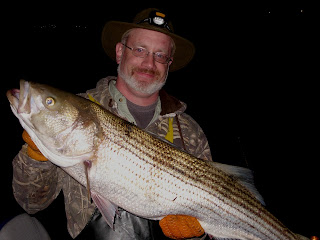 Night fishing pays off.  Greg Vespe, an East Bay area resident, has successfully completed 375 night striped bass fishing trips on Narragansett Bay. “I fish at night to catch quality fish… it’s not as dark as you think out there.” Greg with a striped bass he caught a night on the Bay. 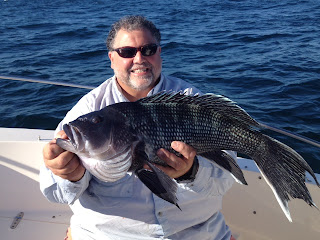 Why fish at night?
Greg Vespe has successfully completed 375 night fishing trips for striped bass on Narragansett Bay.  He fishes for three types of striped bass. The first group he targets are spring fish, the second are transit bass and the third he refers to as “resident grubbers”.  He spoke last week at the Rhode Island Saltwater Anglers Association (RISAA) monthly seminar and shared tactics he uses to target these fish from early May to October.
One may ask why fish at night?  Vespe said, “Fishing at night allows me to be competitive, I can catch quality fish, it is peaceful and not crowed like in the day and the seas are usually a lot calmer at night.  And, it is not as dark as you think out there.”
Greg, who generally fishes from his 14’ aluminum boat (and occasionally from shore) finished 16th out of 1,500 anglers in the Striper Cup Angler of the Year competition in 2009.  So he is an accomplished fisherman.
He suggests anglers should have confidence in their boat and ability to navigate at night.  “Go out during the day to the exact spots you plan to fish.  It is not like day time fishing where you go from spot to sport and are consistently moving.  I pick three spots, going to the furthest one first set up and fish and then progressively move to locations closer to the boat ramp.”  Once you select a location you settle in and fish that spot.
If the squid are running in the spring, he prefers to fish the lower Bay with squid rather than chasing menhaden and bass up the East Passage and Rivers.  The transit fish come into the Bay in July and August at night to feed in the lower Bay, they are aggressive fish but do not tend to hold long.  The “resident grubbers” are the fish that target lobsters and crabs, they tend to be loners and are often beat up from feeding off the bottom.
Here are some night time fishing tips from Greg.
Anchor so your bait is on top of the structure, not necessarily the boat.  He usually fishing in 6 to 20 feet of water, but if the bottom looks broken (with a lot of structure) in 40 feet of water he will fish there too.  Often times he uses two anchors so he can position the boat and be able to move it to take advantage of the structure as the tide and current change.
One of his favorite spots to fish in the eastern third of the Newport Bridge
Be quite and stealth when fishing for bass.
His favorite bait is squid in the spring and early summer May, June and July and uses a whole squid, fished two feet off the bottom, changing weight as the current changes.
As the water heats up he usually switched to eels, however, once the rods (he fishes three) are set he often throws plugs with his spinning rod and reel.
Fisheries council meeting, Monday, September 10
Now is the time to express your thoughts about the Rhode Island fishery.  Attend the Rhode Island Marine Fisheries Council meeting Monday, September 10, 6:00 p.m. at the Corless Auditorium, URI Bay Campus, and South Ferry Road Narragansett, RI.  Agenda items will include a review of 2012-2013 recommendations for winter shellfish management area schedules, and 2013 commercial fishing licensing.  Also agendas for the new day long advisory panel meetings DEM and the council are experimenting with will be reviewed including summer flounder, scup/black sea bass and the Atlantic herring ad hoc committee panel.
Where’s the bite
Striped bass are still plentiful at Block Island with the southwest ledge area still hot. Anglers fishing the lower Bay and off southern coastal shores are not experiencing a good bite.  George Allen of Portsmouth said, “Fishing off Newport trolling wire with tube and worm was not productive last week.  The bluefish are prominent, they kept biting off the tips of the worms.”
Fluke and black sea bass fishing in the Bay was challenging this week with few fish now being caught under and around the Newport and Jamestown Bridges. Bite for fluke and black sea bass still good off the center wall at the Harbor of Refuge up to the 3 mile limit. Snug Harbor Marina reports a good fluke bite off Scarborough Beach in 70 to 80 feet of water and on the south and east sides of Block Island.  Black sea bass are still thick at the south west ledge. Ralph Battista (executive chef at Luigi’s Restaurant & Gourmet Express in Johnston, RI) landed a monster 6 pound black sea bass last week on the Southwest Ledge.  Ralph said, “This monster took an eel (when striped bass fishing)… We also took a 4.5 lb on an eel as well.”
Offshore. Snug Harbor Marina reports yellowfin tuna at the SE corner of the Dump on the troll.  David Appolonia catches his second giant bluefin tuna in three weeks.  This one was 764 pounds.  Details next week on the fight.  Ken Landry of Ray’s Bait & Tackle, Warwick, RI has been tearing it up offshore.  He had three successful trips last week fishing between the Mud Hole and Cox’s Ledge.  “His trips netted school blue fin tuna, two hammerhead sharks, two Mako sharks, 35 or so cod fish and 8 to 10 Mahi Mahi each day.” said Ken Ferrara of Ray’s Bait. (Sorry about not referencing your shop correcting last week Ken and Ray).s