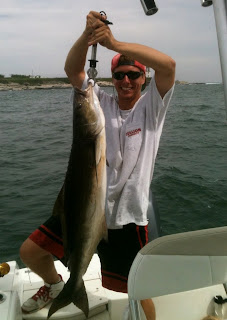 Warm water fish:  Mason Sherman of North Kingstown with the 32 pound, 46” cobia he caught while fluke fishing just south of the Jamestown Bridge.  Several of the warm water fish have been caught in Narragansett Bay and along coastal shores this year. 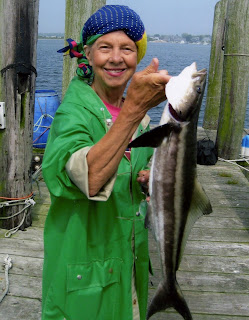 Priscilla Bogdan of Lincoln, RI landed this cobia off Point Judith, Narragansett last month.  One of several cobia caught this year off coastal shores and in the Bay.

Warm water fish in Bay and global warming
“There is no longer any credible scientific debate about the basic facts: our world continues to warm, with the last decade the hottest in modern records, and the deep ocean warming faster than the earth’s atmosphere. Sea level is rising. Arctic Sea ice is melting years faster than projected.”
This quote is not from liberal environmentalist but rather from four Republican E.P.A. administrators that served under Richard Nixon, Ronald Reagan, George Bush and George W. Bush.  It came from an opinion letter they published in the August 1, 2013 issue of the New York Times.
The letter goes on to urge we support initiatives such as “reductions in the amount of carbon dioxide emitted by the nation’s power plants and spur increased investment in clean energy technology, which is inarguably the path we must follow to ensure a strong economy along with a livable climate.”
The dialogue on global warming has changed from a bipartisan issue on whether or not it is occurring to what should be done about it now as a nation, and I might add as fishermen.
Local evidence of climate change includes Narragansett Bay and near coastal water temperatures heating up for nearly forty years.  How warm you ask? Well it used to be very cold.  The crew of the Brenton Reef lightship measured water temperature at the mouth of Narragansett Bay every day from July 1878 through January 1942.
In the coldest winter recorded (1917-18) the water temperature from December through February was 33.2 F. The average for the whole period of their record (64 years) is 39.1 F. This temperature is far from the warmer water temperatures recorded in February, 2012… Conimicut Point, 45 F; Newport, 42 F; and Block Island, 46 F.
OK, so we have a warming Bay (URI Bay temperature studies confirm this too, the Bay has warmed 2 to 3 degrees depending on time of year in past 45 years), and evidence of a rising ocean in New England (and Rhode Island) with beach erosion occurring all along our coastal shore.
Now what about the fish?  What seems to be happening is that the cold water fish (like cod) are moving out of the area, away from coastal shores and out into deeper waters. Last year my brother-in-law and I traveled to Cox’s Ledge (over 18 miles offshore) to catch them.  And, for the past few years we have had warm water fish (and manuals) being sited or caught in the area.  Dolphin sightings in Narragansett Bay in the fall for the past couple of years, blue fin tuna at the mouth of the Bay in January and cobia being caught in the Bay this summer are some examples.
Last week Mason Sherman, a URI engineering student from North Kingstown, RI, caught a 32 pound, 46 inch cobia when he was bottom fishing for fluke (summer flounder) just south of the Jamestown Bridge.  Mason said, “I was using very light tackle... 20 lb test monofilament line and a plastic squid rig tipped with a fresh piece of squid.  Every time I would get the fish close to the boat it would dive.  I mean dive deep below the boat… it took about 25 minutes to land the fish.”
Last month Greg Vespe of Tiverton landed a 17 pound cobia fishing north of the Newport Bridge when fishing with Atlantic Menhaden chunks for striped bass. Bait shop owners have reported an additional three to four cobia being caught in the Bay this year.
Cobia (a warm water fish) migrate along the Atlantic coast on a seasonal basis. In spring, they move from southern Florida, to the Carolinas as water temperatures rise. That’s right, I said the Carolinas… not Rhode Island.
As fishermen, we know the water is warming and we need to do everything we can to curb climate change.  Don’t get me wrong, nothing wrong with catching warm water fish here, I would love to catch a cobia, but it would be nice if some fish were left for my great grand children.  And I don’t mean fried fish.

Striped bass fishing at Block Island is still good with smaller fish (28”-32” keeper size) being taken at the North Rip and larger fish on the South West Ledge. Umbrella rigs still seem to be the bait of choice during the day. Last week striped bass were between Gould Island and the Newport Bridge and all along southern coastal shores, this week that action slowed down a bit.

Fluke (summer flounder) fishing remained good but spotty this week with fish being taken (for the first time in years) in the upper Bay.  Dave Henault of Ocean State Tackle, Providence, said, “Customers are catching fluke at Fields Point and in other places in the upper Bay… in eight to fourteen feet of water if you can believe that.  The fluke are feeding on skipjacks (baby blue fish) in coves and along shoreline areas.” John Littlefield of Archie’s Bait & Tackle said, “Customers are catching fluke in places where they have not been for years.  Last week anglers caught keeper sized fluke at Sabin Point.” The fluke bite off Newport and Jamestown remained good but spotty with fish being taken in good numbers depending on the day under the Newport and Jamestown bridges, at Austin Hollow, Dutch Island,  Hull and Mackerel Coves off Jamestown.  Some days anglers have found fluke in numbers off Newport beyond Seal Ledge and the Brenton Reef areas.  John Wunner of John’s Bait & Tackle, North Kingstown said, “Customers have been catching fluke everywhere including the entrance of Allen’s Harbor, in Wickford Harbor.”  The fluke bite in Greenwich Bay continued to be slow as the western portion of the Bay is recovering from hypoxia (oxygen deprivation) at the lower levels of the water column.

Scup fishing remains strong throughout the Bay at the usually place… Colt State , Bristol, the bridges, Providence Point, Ohio Ledge, etc
.
Blue crabs have been plentiful in coves and estuaries.

Skipjacks (or baby blue fish) have invaded coves, ponds and inlets.  Anglers have been catching them in volume.