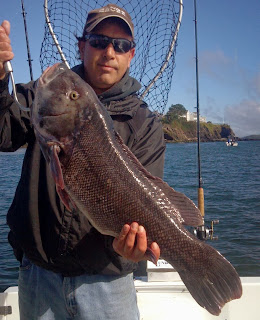 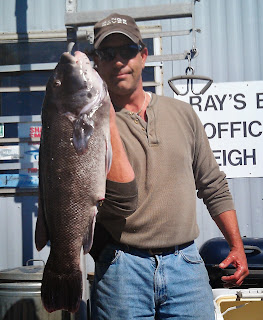 Huge tautog:  Scott Kiefer of Exeter, RI with the sixteen (16) pound tautog (two above photos) he caught off Hope Island in Narragansett Bay. 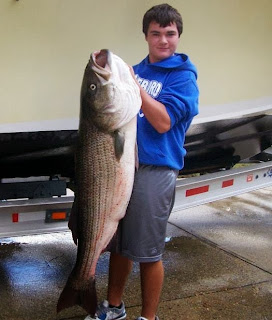 Trophy bass:  Robby Araujo of Attleboro, MA with a trophy sized 51 pound striped bass he caught this week drifting eels on the southwest side of Block Island with Capt. Tracy Terrien and his father. 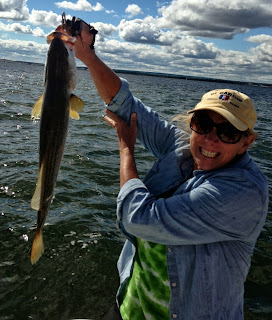 Squeteague still biting.  Carole Prisco (above) of Warwick (with daughter Amanda and husband Charlie) caught four squeteague; the largest was 26” (below) using large pieces of squid between Hope and Gould Islands. 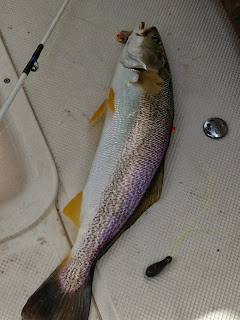 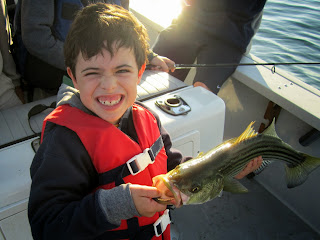 Giant tautog caught this week
It was a chilly fall morning requiring jackets.  The sun rose Sunday and things started to warm up at Hope Island off the northern tip of Jamestown in the West Passage of Narragansett Bay.  Anglers Scott Kiefer of Exeter, RI and his fishing partner Angelo Manni anchored and sent their chum pot down.
“We started to land fish right away.  The tide was ripping.  Conditions were right.” said Scott Kiefer. Then Scott got a huge hit on the green crab he was using for bait. “This fish didn’t go down heading for structure like most tautog.  It ran, very much like a striped bass.  It went behind the boat. Under the boat and when I finally brought it up Angelo looked it in the eye and it ran again.” said Kiefer.  It took Scott with Angelo’s help on the net about six minutes to land the tautog.

The fish was sixteen (16) pounds, and about 30” long.  This is a huge tautog. A ten pound fish is considered a prize and a fish of a lifetime for many.  The Rhode Island record for tautog is 21 pounds, 4 ounces, established in 1954.  Ken Landry of Ray’s Bait & Tackle, Warwick weighed the fish in and said, “I have never seen a tautog this big up close… they caught some nice six and seven pound fish too but I couldn’t take my eyes off this big one.”


Tautog tips from the experts


Feel the bite… tap, tap and then get ready for a tug of war.  Captain George Cioe said, “I believe with the first tap the tautog is positioning the bait for consumption.”  Once the fish is hooked, keep the rod up and pressure on so the fish is not able to run for cover. Captain Rich Hittinger, RISAA vice president and a long time angler out of Point Judith said, “If you get two bites with no hook-up your bait is gone. Reel in and re-bait.”
Where to fish for tautog.  From shore, look for rocky coastline like Beavertail Point on Jamestown, locations off Newport, the rocky shore line off Point Judith and off jetties along the southern coastal shore.  Docks, piers, bridges are good structure too.  From a boat, I have had good luck at Conimicut Light, Plum Point light house next to the Jamestown Bridge, the jetty at Coddington Cove in Portsmouth, off Hope Island, around Brenton Reef and Seal Ledge in Newport, Whale Rock, Ohio Ledge in the East Passage, General Rock in North Kingstown and any other places there is structure, debris, rock clusters, wrecks, etc.  Another key factor is water movement, so a couple of hours before or after high or low tide is good.


Chumming for tautog will enhance your catch dramatically.  Kevin Bettencourt from the East Bay Anglers said, “Chumming is a critical part of tautog fishing. If you want to land numerous tautog you must establish an effective chum line. This can be accomplished with grass shrimp or crushed Asian/green crabs. Don't be afraid to feed them! If you don't, they won't stick around long!”  Captain Robb Roach of Kettlebottom Outfitters from Jamestown said chumming is very important… “I chum with crushed mussels or crushed periwinkles.”


Striped bass.  Capt. Charlie Donilon of Snappa Charters said, “Striped bass fishing the past few days has been the best ever at Block Island.   We caught 80 bass in one trip this week.”Dave Sweet and Craig Picard fished off Pt. Judith Sunday. Dave said, “Using a small silver spoon, my first fish was a 16 lb. bluefish on light tackle, what a workout!  We each managed a couple of nice stripers, from about 23" to largest at about 36"… looks like the fall run is on.” Capt. Al Anderson of the charter boat Prowler reports similar results with striped bass and blues off the center wall and in front of Scarborough Beach.  Both boats tagged and released their bass.  John Littlefield of Archie’s Bait & Tackle, East Providence said, “It has been hit or miss at Block Island for my customers, no bites at night and then the next day the bass bite was on.” Capt. Tracy Terrien said, “Drifted eels for six bass 35- 51 pounds on the southwest side. Broke off on three and when bringing the fish up there was numerous monsters swimming with them…”  Ken Landry of Ray’s Bait & Tackle, Warwick, said, “School bass with keepers mixed in are being caught with storm shad baits early morning and at sunset in Apponaug Cove.”  Angler Ron Nalbandian said, “Birds all over the place (in front of Charlestown Breachway). (Landed) 14 Stripers 20”- 34” all on metal and 6” shads.”

Tautog.  The big news this week is the sixteen pound tautog caught by angler Scott Kiefer of Exeter, RI.  Ken Landry of Ray’s Bait & Tackle, Warwick, weighed the fish in and said, “They fished Hope Island for about an hour and half and the action was great with big fish and then things slowed down with a lot of shorts being caught.”  John Littlefield of Archie’s Bait said, “The tautog bite is good at Conimicut Light, Rocky Point, and the bridges in Barrington and Warren but with a ratio of about one keeper (16” or larger) to eight smaller undersized fish.  Saturday I fished Seal Ledge off Newport and managed three keepers with six shorts and a lot of small black sea bass. Other boats were fishing south of Brenton Reef and others off Castle Hill Light.

Cod fishing continues to improve with fish to twenty pounds being taken on the Frances Fleet this week. Roger Simpson of the Frances Fleet said, “We are seeing tremendous amounts of herring, squid and even some sand eels on the ground so there should be more fish showing in the weeks to come.”
Offshore.  Angler Eric Weybrant said, “(Friday) The drift was North to South (at the Mudhole) and we were 1/2 mile or so South of the deep spot when we had our first taker which turned about to be a 177 lb Mako.”