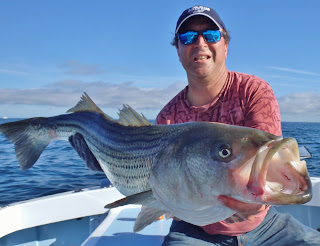 Steve Brustein of Portland, ME with a 30 pound Block Island striped bass he caught Saturday on No Fluke Charters. 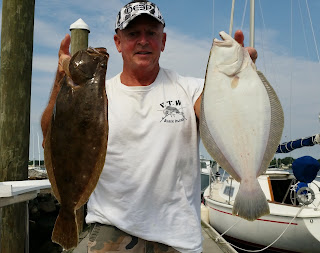 Fluke still holding inshore: Angler Jack Leyden of North Kingstown with two fluke to 22” he managed to catch while fishing in the Newport Bridge area after storms last week. 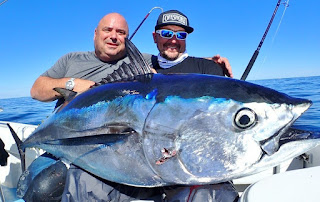 The Newport International Boat Show held this weekend was a great success.  I attended Sunday under threatening skies and the in-the-water show docks were crowded with attendees. Over 600 exhibitors were at the show with an assortment of boats and a wide variety of accessories, equipment, electronics, gear and services for boaters. I visited the People’s Choice Award Winning manufacturer and checked out a few other exhibits that impressed me.

The Nordic Tug 40 foot Flybridge won the People’s Choice award at the show.  Its big sister the Nordic 44 Tug took second place in the People’s Choice.  The Nordic Tugs on display at the show were getting a lot of attention when I toured them. I ran into three different Nordic Tug owners who were just stopping by to say hello to the Nordic team.  One owner said, “You know what makes the Nordic a desirable boat… it’s the fit and finish, just look at this woodwork.”  Paul Tortora, sales representative for Wilde Yacht Sales that represents Nordic, said, “Nordic gives you the economy of a displacement hull (2.5 gallons/hour), yet it can comfortably cruise into the mid to upper teens.”  The Nordic 40 features a new wider swim platform with a large stern entry door and new this year a second side door at the stern. The Nordic Tug 40 brochure price was $729,950. Visit www.wildeyachts.com   for details.

The Parker 2510 walk around with a cuddy cabin is a fishing machine.  This stable fishing platform has been upgraded with some finer touches such as colored hulls and fabrics.  Over the past couple of years they added a stern cockpit door and live well.  Tom Grimes, sales associate for Don’s Marine in Tiverton that represents Parker in this market said, “Parker was always a great fishing boat appealing to fishermen.  They now have added some touches like hull colors and fabric colors that appeal to women and families.”  The 25 foot Parker on display a the show featured a Windlass Package, a  West Coast Bow Rail Package, a Sandy Tan Hull and two 200 horsepower engines.  The show special price on this 2016 2510 W/A was $132,366.  Visit www.donsmarineri.com  for details on this Parker and others.

Dockwa software application that can find you dockage or a mooring in Newport, Boston, the Cape and Islands, New York and a host of other destinations. Discover and stay in new harbors… just tap, book a slip or mooring. The app works from your telephone or the web.  The application can be downloaded from the Apple Store or Google and it is totally free. So book in advance or make a last-minute reservation with Dockwa.  Visit www.dockwa.com  for details.

Zipwake dynamic trim control tabs.  These are not your conventional aluminum trim tabs but a system that incorporates a state of the art series of durable, fast-acting interceptors that eliminate the trim problems of planning and semi planning boats between 20 and 60 feet.  Zipwake sales associate Dan Schermerhorn of Pro Marine Distributing said, “The system eliminates boat pitch when passengers walk around the vessel automatically and the system automatically eliminates wave resistance which saves fuel and money.”  Prices for the system which includes a control panel, distribution unit and their state of the art interceptors that extend and retract as needed start at about $1,800 for vessels 18 to 20 feet.  To get a feel for how this system works, visit www.zipwake.com.

The workshops take the place of specie advisory panels that use to meet multiple nights rather than at one workshop meeting.  The workshops are part of the Department’s “lean initiative” that identified ways to save time and money while enhancing public participation at input meetings.

Although most specie advisory panels were eliminated, two remain intact; the Industry Advisory Committee (IAC) that coordinates recommendations from commercial fisheries sectors and the Shellfish Advisory Panel (SAP) which provides recommendations to the Council on all shellfish-related matters.

The RIMFC also welcomed two new councilpersons to their first meeting;  Michael Roderick, an executive at Town Dock, Narragansett and Travis Barao of East Providence, a recreational fisherman and a member of the RI Saltwater Anglers Association (RISAA) board of directors.

For information on RIMFC meeting material and minutes from past meetings, visit www.dem.ri.gov .

Striped bass fishing improved greatly this week as the water cleared from the storm.  Dave Henault of Ocean State Tackle, Providence, said, “Anglers are catching striped bass from shore in the lower Providence River from Pawtuxet to Conimicut Point using eels and lures. Fishing is also good on the Cape. Customer Elijah Depaolo (13 years old) caught a 32 pound bass using live eels on the Cape Cod Cannel.” Jason Macedo of Lucky Bait, Warren caught a 47 pound striped bass last Friday at Block Island using eels at night.  Angler Eric Appolonia said, “My son Alex and his friends fished the Southwest Ledge of Block Island this past week and caught nine striped bass on one drift using eels.” I fished with Steve Brustein of Portland, ME Saturday at the Southwest Ledge where he managed to hook up with bass to 30 pounds trolling tube & worm.  Bill Sokolowski reports on the RISAA blog that, “We fished the Southwest Ledge Saturday night and once the sun set bass started to hit on each drift. Three of us caught a total of ten striped bass. The largest was 35 pounds. We each kept a small fish and released the balance. So much for no fish on a full moon. It couldn't have been a more beautiful night!”  John Littlefield of Archie’s Bait & Tackle, Riverside said, “School size bass are being caught in the East Passage with a few keepers mixed in.”

Black sea bass and fluke.  The fluke bite has softened a great deal, however the black sea bass bite is still good.  Angler Mike Swain of Coventry fished off Narrgansett Saturday and boated six nice black sea bass and one summer found.  I fished south of the windmill area at Block Island Saturday as well as the Hooter buoy area off Pt. Judith and did not catch as may black sea bass as we have in the bass with only short fluke caught at this time.  Manny Macedo of Lucky Bait said, “Sea bass fishing for some customers is OK with fluke still being gh off Newport and at the mouth of the Sakonnet River.”

False Albacore. “ The albie bite from shore at Pier Five, actually anywhere from Narrow River to the West Wall has been outstanding from shore.  One customer caught 50 false albacore from Pier Five. Most people do not eat them but I have some customers that like eating them.  They prepare them using coconut milk.” said Dave Henault of Ocean State Tackle.

Cod fishing has been good.  Angler Lary Norin reports catchingt cod to 30 pounds on Cox’s Ledge.  Capt. Frank Blount of the Frances Fleet said, “Our largest fish this week was in the 20’s with fish taken on both bait and jigs.  Hi hook this week went to an angler that boated seven nice cod fish.”

Bluefish large and small are being caught in the Bay with skipjacks growing in size.  John Littlefield of Archie’s Bait said, “Some skipjacks are 6 to 10 inches long, and they are still very plentiful.”  Manny Macedo of Lucky Bait said, “Bluefish are all over the Bay, more plentiful than they have been most of the season.”

Tuna fishing for school bluefin is hot at the Cape.  Angler Dave Henault of Ocean State Tackle said, “I fished with Capt. Jack Sprengel of East Coast Charters, Warwick Friday on the Cape and landed a 120 pound bluefin using light tackle with a spinning reel and jig in 173 feet of water.”
Posted by Captain Dave Monti at 5:33 AM