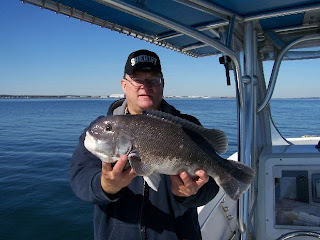 Captain John Sheriff, with a Narragansett Bay tautog he caught last week, advises using a grapping hook anchor made with rebar so if caught in rock it will bend and free itself. 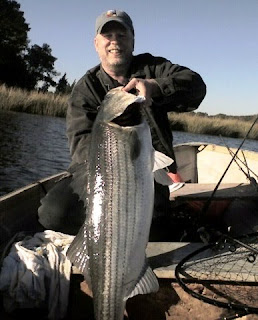 Anthony Resta of North Chelmsford, MA with a 42” striped bass he caught with his friend Alan Stewart. The pair caught six bass in the high 30” to low 40” range using surface plugs in the Westport River.

Tautog fishing exploded this week with shore and boat anglers catching some great fish. Many anglers caught their limit in fairly short time in Narragansett Bay as well as off southern coastal shores in Newport, Beavertail (Jamestown) and Narragansett.

And, as of October 16 the catch limit for private recreational anglers increased from three fish/person/day to six fish/person/day. However, new this year, is a ten fish per boat limit. The boat limit does not apply to charter and party boats (visit DEM’s website at www.dem.ri.gov for complete salt and freshwater fishing regulations).

With the tautog season in full swing, it’s the perfect time to hear from some “tautog experts”. Over the past month I asked expert tautog anglers, fishing guides, charter captains and bait shop owners for tautog fishing tips. The tips below are the second installment of what they had to say (tips appears in last week’s column which can be found on this publication’s website or by visiting my blog at www.noflukefishing.blogspot.com ).

Positioning over structure
Positioning over structure is important when tautog fishing. You have to be over or near structure (rocks, piers, wrecks, ledge, humps or holes, etc.) to catch tautog. Anglers use a number of strategies to ensure their vessel is properly positioned and stays in position. The trick is positioning the vessel without getting your anchor stuck in rock. Two years ago I lost an anchor on the northern side of Hope Island that got stuck in rock... ouch!!! It cost over $200 for a new anchor and line. I now often use a $1.49 cinder block as an anchor when fishing areas that require anchoring on rocky bottoms. The cinder block holds if current is moderate. Captain Robb Roach of Kettlebottom Outfitters, Jamestown, said, “I use two anchors to get proper positioning over structure.” Robb said that he stays away from crowds and finds his own fish, it also gives him plenty of room to make sure he is properly positioned. Captain John Sheriff of Captain Sheriff’s Charters suggests using a grappling hook anchor make of rebar. The soft rods allow the anchor to bend if it should get caught in structure. Captain Sherriff said, “Many anglers tie a line to the end of their Danforth or grappling hook anchor (opposite the chain end) and attach a float to the other end of the line”. When ready to leave they pick up the float and line which pulls the anchor out of the structure the same way it went in. Captain Rick Bellavance of Priority Too Charters, Galilee, RI said if it takes several times to position yourself properly over structure then so be it. Remember no structure, no tautog.

Rod and rigs
I use a rod with a flexible tip so I can feel the tautog’s first bite, but yet a rod with a lot of background to muscle the fish away from structure. My personal chose is a one piece Penn medium action spinning rod with 30 lb. test brad line. The braid line does not stretch like monofilament line which could allow the tautog to move more easily back to structure. The tautog experts I spoke with all seem to agree. The simpler the tautog rig the better, less hardware means less chance of getting caught in structure. This year my favorite rig was suggested by John Wunner of John’s Bait & Tackle in North Kingstown. It is a very simple rig consisting of an egg sinker, a two-way swivel and a single hook. The egg sinker slides on the main braid line which has a two-way swivel attached to it, the hook with 12" to 15” of line is attached to the other end of the swivel. Bottom snags seldom occur, I have used this rig a few times this year without losing any rigs. Captain John Rainone of L’il Toot Charters, Narragansett, has developed a special tautog rig with a sinker line that breaks if the singer gets caught in structure. You can retrieve the hook (and/or the fish) if the sinker gets stuck. Captain John said, “One hook saves rigs and fish… waiting for a second fish to jump on that second hook makes no sense.” Angler/Captain Kevin Bettencourt of the East Bay Anglers likes to use a three-way swivel rig. The main line is attached to the swivel and then a sinker is attached to the second swivel loop and the third swivel loop has a 24” fluorocarbon (30 to 40 lbs) line attached with either a 3/0 to 4/0 Gamakatus Octopus Hook.

Last week a number of tautog tips were covered in this column, however, one is worth repeating… where to fish for tautog.

Where to fish for tautog
John Littlefield of Archie’s Bait & Tackle, East Providence said, “It may take some looking and experimenting but shore anglers should find a spot that works for them... off wharfs, rocky shoreline and docks”. Popular places anglers have been catching tautog this fall include reefs/humps/holes off Newport; rock piles off Narragansett beach; Beavertail Point, Jamestown (from shore or boat); Whale Rock off Narragansett; Plum Point Light in North Kingstown next to the Jamestown Bridge; Conimicut Light, Warwick; Colt State Park, Bristol; Coddington Cove, Middletown; General Rock, North Kingstown; from shore at Quonset Point, North Kingstown; Ohio Ledge (in the East Passage); Hope Island; and the wharfs along the Providence River.

East Bay Anglers
The East Bay Anglers’ Fishing Expo will be held Sunday, January 30, 2011 (more information to come). I spoke about tautog fishing at their October meeting last week and had a great time. They are a great group. Contact Will Barbeau if you are interested in joining at wbarbo@cox.net .

Where’s the bite
Striped bass fishing continues to improve in Narragansett Bay. Fly fisherman Peter Nilsen of Barrington said, “Finally the bass are moving up into the beaches in the upper bay. Caught two keepers along Barrington Beach and missed a few others. Not much bait showing, just a few very small pods here and there.” Angler Alan Stewart, a member of the Rhode Island Saltwater Anglers Association, has been hitting big bass in the Westport River using top water plugs in the morning. Last week he caught six huge bass, the largest was over 40”. The striped bass bite at Block Island continues to be hot too. Angler Eric Appolonia of North Kingstown said, “The bass bite off Block Island is outstanding. I picked up three nice bass in an hour using eels on the southwest side of the Island”. Reports from charter boats fishing the Island have been good too.

Tautog fishing is outstanding (see above column). Captain John Sheriff took three clients tautog fishing Sunday off Newport in the reef area and said, “We fished in the NW gusty winds on an outgoing tide. The group caught 35 tautog and 27 keepers. Most of the fish were released”.
Posted by Captain Dave Monti at 7:20 PM