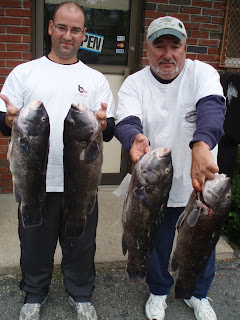 October 11, 2010
Kevin Bettencourt (left) of the East Bay Anglers and his Dad Albert Bettencourt (right) are tautog fishing experts. Last week they limited out north of Conimicut Light in Warwick. Their fish were in the 3 to 7 lb. range. Kevin said, “Chumming is a critical part of tautog fishing.”

Tautog fishing is fun. I like to relax with friends and family, shoot the breeze and enjoy a great Rhode Island fishery all at the same time. Tautog (or Blackfish) is a great eating fish with a dense whitish meat.

The Rhode Island Department of Environmental Management (DEM) regulates tautog fishing. Fish have to be sixteen inches and catch limits changed this fall. The catch limit for private recreational anglers on and before October 15 is three fish/person/day, which jumps to six fish/person/day on October 16. However, new this year, is a ten fish per boat limit. The season ends December 15. The boat limit does not apply to charter and party boats.
You learn to fish two ways, by personal experience, and by what you learn from others. Over the past month, I have asked noted Rhode Island anglers, fishing guides, charter captains and bait & tackle shop owners in Rhode Island for tautog fishing tips. I plan to share these tips over the course of the season. So here is the first installment on tautog fishing tips.
Fishing in the fall is cold. Dress appropriately. If you dress in layers, you can take them off as the sun warms you.. Do not forget the gloves, I usually have at least four pair with me … water proof neoprene gloves, light cotton gloves, heavy winter gloves… whatever the conditions, be ready, and of course the gloves get wet.

Boat placement is important. Find structure wit electronics, estimate wind/drift direction and anchor up current from where you want to fish and drift back to the spot as the anchor is setting. Once in position, fish all sides of the boat. Ken Ferrara and his son Ken Landry of Ray’s Bait & Tackle in Warwick suggest casting a bit to cover as much area as you can. If still no bites, let some anchor line out a couple of times to change your position, if still no bites it is time to move the vessel.

Fish lodged in structure. Here is a tip from George Poveromo’s “Rock’em Sock’em” article that appeared in one of last year’s issues of Saltwater magazine. When a fish is hooked and it has muscled its way back to structure, apply pressure forcing a respectable amount of bend in the rod. If the fish is not moving, hold the rod vertically to the water, tighten the line and pull or pluck the fishing line like a banjo string. The sharp vibrations emitted work their way back down to the fish through the line and irritate it. The fish, in a state of confusion, may back out of the hole to free itself from the irritation. Once you sense this has happened start reeling in the fish. I used this technique last year and it worked. If this does not work try letting the line just go limp for a couple of minutes. With no pressure on the fish, it may dislodge itself. To my surprise, the rig often frees itself, the fish may get unhooked, or you are free and catch a fish.

Feel the bite… tap, tap and then get ready for a tug of war. Captain George Cioe said, “I believe with the first tap the tautog is positioning the bait for consumption.” So at the second tap I raise the rod up firmly feeling for the weight of the fish (no need to jerk the rod up hard). Once the fish is hooked, keep the rod up and pressure on so the fish is not able to run for cover. Captain Rich Hittinger, a long time angler out of Point Judith said, “If you get two bites with no hook-up your bait is gone. Reel in and re-bait.”

Where to fish for tautog. From shore, look for rocky coastline like Beavertail Point on Jamestown, locations off Newport and off jetties at South County beaches. From a boat, I have had good luck at Plum Point light house next to the Jamestown Bridge, the rock wall north of Coddington Cove in Portsmouth, off Hope Island, around Brenton Reef in Newport, Whale Rock, Ohio Ledge in the East Passage and any other places there is structure, debris, rock clusters, wrecks, etc.

· Chumming for tautog will enhance your catch dramatically. Kevin Bettencourt from the East Bay Anglers and his Dad Albert have been fishing for tautog in Narragansett Bay and southern coastal water off Newport, Jamestown and Narragansett for many years. Kevin said, “Chumming is a critical part of tautog fishing. If you want to land numerous tautog you must establish an effective chum line. This can be accomplished with grass shrimp or crushed asian/green crabs. Don't be afraid to feed them! If you don't, they won't stick around long!” Robb Roach of Kettlebottom Outfitters from Jamestown said chumming is very important… “I chum with crushed mussels or crushed periwinkles.”
DEM has groundbreaking
DEM and the US Army Corps of Engineers joined federal, state and local officials at a groundbreaking ceremony for the Ten Mile River Aquatic Ecosystem Restoration Project last week at Hunt’s Mill Dam in East Providence. The restoration project will include fish ladders to provide for upstream migration of adult Blue-black Herring, Alewife, and American shad to historic spawning areas on the Ten Mile River and in Turner Reservoir.

There is no excuse. Get out and fish this week. The weather conditions look good at press time, the fish are biting and winter will soon be here. Water temperature has dropped and the new moon phase is great for fishing.

Striped bass are on the move and being caught off coastal beaches from Newport to Watch Hill. Many reports of keeper striped bass being caught in the Bay too. Block Island fishing for bass is still very hot.

Blue fish bite off coastal beaches and in the Bay is good. They are finally working bait pods pushing them to the surface, exciting the birds.

Tautog fishing is great too. Many reports of keeper fish taken in the Bay around Conimicut Light, Plum Light, at Coddington Cove, General Rock in North Kingstown and off coastal shores where there is structure.