Bureau of Ocean Energy Management (BOEM) lease areas from Massachusetts to the Carolinas. 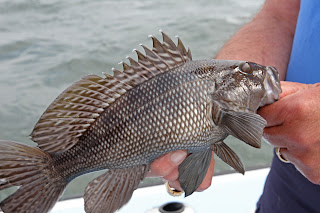 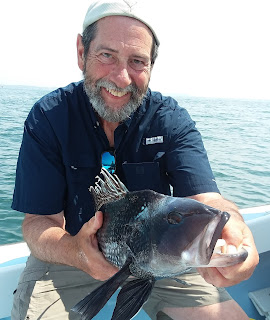 Today black sea bass are climate change winners.  They are more abundant due to warming water like this fish caught off Rhode Island by Capt. Dave Monti.

It’s very hard to get a handle on offshore wind. We have twenty or so lease areas from Massachusetts to the Carolinas, six of them (all granted to developers now) are off Rhode Island and Massachusetts. The kicker is that each of these lease areas will house multiple projects.  Projects that could harm or help habitat and fish in their area.  However, the big question being asked by fishermen and scientists alike, is what cumulative impact they will they have on fish and habitat when they are all built, up and running?

For the past few months Vineyard Wind has been in negotiation with fishermen on a mitigation plan for one project… eventually many projects will be built on the east coast.  The permitting process and various stages of approval for any one wind farm is daunting including, hundreds of meetings, hearings, permits, negotiations, etc.  Who knows what effect several projects in an area will have, developers have been just trying to get their project up and running.

Offshore wind farm developers are much like land developers.  They acquire or lease a parcel and then develop it with ocean wind farms as they have the electricity sold.  Much the same way that a land developer would develop a large parcel of land only building what they have good reason to believe they can sell in stages.

Last month during mitigation negotiations Rhode Island fishermen on the Fisheries Advisory Board (FAB) of the Coastal Resource Management Council (CRMC) approved a $16.7-million negotiated mitigation agreement with Vineyard Wind.  The settlement provides funds for research to study safe effective fishing in the project area as well as research that may help future projects and their relationship to fishing.  The agreement also includes $4.2 million in payments spread over 30 years for assistance with direct impacts of the wind farm on fishing in Rhode Island.

The Fisheries Advisory Board of CRMC, the Anglers for Offshore Wind (AFOW) which is a recreational fishermen’s group that supports the responsible development of ocean wind, and the Rhode Island Saltwater Anglers Association (RISAA) all expressed concern to the Bureau of Ocean Energy Management (BOEM) about cumulative impacts.  All expressed concern at public hearings and in writing after hearings pertaining to Vineyard Wind’s Environmental Impact Statement on the project.

RISAA and the AFOW both suggested that BOEM establish regional fisheries advisory committees.  The committees would look at wind farms on a regional basis taking into account any negative or positive cumulative impacts on habitat and fish multiple wind farms in a region may have together.
Renewable energy in the form of offshore wind is vitally important for our nation to help stem the tide on climate change and provide clean, affordable energy for all Americans.  However, we have to stay on top of things and make sure we do no harm to fish or habitat in the process.

I believe regional committees that keep an eye on individual projects and cumulative impacts of multiple wind farms in a region makes a lot of sense.  Like other fishermen I hope BOEM takes this suggestion under advisement and forms such committees.  For information on ocean wind farms visit https://www.boem.gov/Offshore-Wind-Energy/ .

Warming water impacting fish volume, down 15 to 35% in some regions

A study titled ‘Impacts of historical warming on marine fisheries production’ was released in Science magazine last week at http://science.sciencemag.org/content/363/6430/979.  The study was led by Christopher M. Free of the Department of Marine and Coastal Sciences, Rutgers University along with a number of collaborating scientists.

The study abstract relates Dr. Free and his associates “used temperature specific models and hindcasting across fish stocks to determine the degree to which warming has, and will, affect fish.”  The study found that overall fish yield has reduced over the past 80 years.  The study said, “Furthermore, although some species are predicted to respond positively to warming waters, the majority will experience a negative impact on growth.”

In a Rutgers Today interview, study co-author Dr. Malin Pinsky said, “We were stunned to find that fisheries around the world have already responded to ocean warming.  These aren’t hypothetical changes sometime in the future.”  Rutgers Today said the study reports that the effects of ocean warming have been negative for many species, but also finds that other species have benefited from warming waters.
“Fish populations can only tolerate so much warming, though,” said senior author Olaf Jensen, an associate professor at Rutgers. “Many of the species that have benefited from warming so far are likely to start declining as temperatures continue to rise.”
Black sea bass and scup are examples of species that have benefited from warming in our region, however, as study scientists related even these species (as well as other species in our region) may start to decline as temperature continues to rise.

The Rhode Island Department of Environmental Management and the RI Marine Fisheries Council is holding a public hearing on a number of proposed commercial and recreational 2019 regulations Monday, March 11, 6:00 p.m., Corless Auditorium, URI Bay Campus, Narragansett.  Regulations covered at the meeting will include black sea bass, summer flounder, scup, striped bass, bluefish, cod and others.  For the meeting agenda and a copy of the presentation that will be given at the hearing visit www.dem.ri.gov/programs/fish-wildlife/marine-fisheries/rimfc/index.php.

Stripers Forever advocates for reductions in striper mortality
In a press release last week Stripers Forever, an organization that advocates for striped bass conservation measures, said, “The Atlantic States Marine Fisheries Commission (ASMFC) announced in January that the striped bass resource is significantly overfished and that the spawning stock biomass has dropped back to levels last seen in the early 1990s.”

Stripers Forever expects the ASMFC to announce in May that regulatory changes will be imposed in 2020 to reduce striped bass mortality; specifically minimum sizes will be increased for recreational fishing and a decreased commercial quota for the commercial fishery. Some states may take immediate actions to reduce striped bass mortality, especially release mortality, such as Massachusetts, where circle hooks may become mandatory for bait fishing and gaffing of live striped bass may be prohibited.
For information visit www.stripersforever.org.

Cod fishing.  Party boats sailing for cod this time of year includes the Frances Fleet at www.francesfleet.com , the Seven B’s at www.sevenbs.com, and the Island Current at www.islandcurrent.com .

Posted by Captain Dave Monti at 10:43 AM