Get ready to fish at the Fishing Show 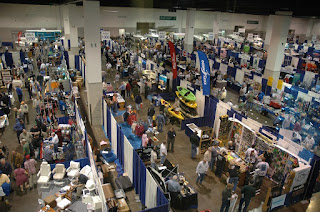 Get ready to fish at the Fishing Show

Get ready to fish at the New England Saltwater Fishing Show, March 22-24 at the Rhode Island Convention Center.  This year it’s the largest ever and includes tackle, rods, reels, lures, electronics, charter guides, boats, motors, accessories, clothes and much more.

Steve Medeiros, show director and president of the Rhode Island Saltwater Anglers Association (show sponsors), said, “We expanded the show adding booths and total over 300 exhibitors with over sixty seminars in three different areas.  Many exhibitors are offering show specials.”  Seminars are given by experts on a wide range of fishing topics from how to catch larger summer flounder to in shore fishing with light tackle from shore, kayak or boat.  Learn about fishing tactics and strategies from top fishermen and charter captains.

Visit www.nesaltwatershow.com/seminars.shtml  for a complete listing of seminar topics and speakers.  By taking a little time to plan your show visit you can make sure you are at the show for the presentations you want to see and visit the booths that have products you want to see.
Special speakers at the show include National Geographic’s ‘Wicked Tuna’ Capt. Dave Carraro of Tuna.com and Capt. Paul Hebert of Wicked Pissah.  The duo will take the show stage and talk about what goes on behind the scenes when filming the Wicked Tuna show.

To get the most out of the show, I select the exhibitor booths I want to visit before the show by circling them in the program and marking them on the show floor plan.  I then spend some time reviewing the seminar topics and speakers noting the ones I want to attend and the times they are offered (most are offered more than once).

Sunday is family day at the show. All women and children under 12 will be admitted free on Sunday, March 24.  A scavenger hunt for children will be held Sunday.  As a child enters the show with a parent they are given a Scavenger Hunt search sheet that can net them a variety of prizes.
Tickets at the door are $10, however advance sales discounted tickets online are $8.00 each.  Children 12 and under are admitted free.  Visit www.nesaltwatershow.com for advance ticket sales.

On Monday, February 25 the Fisheries Advisory Board (FAB) of the Coastal Resource Management Council (CRMC) approved a $16.7-million negotiated mitigation agreement with Vineyard Wind.  Approval of the package moves the project forward to the entire CRMC which at press time was scheduled to be Tuesday to discuss the Vineyard Wind project.

The settlement provides more funds upfront for research to study safe effective fishing in the project area as well as research that may help future projects and their relationship to fishing.  $2.5-million, for five years in a trust fund will be managed by Rhode Island fishermen.  The agreement also includes $4.2 million in payments spread over 30 years for assistance with direct impacts of the wind farm on fishing in Rhode Island.

The banquet will feature an early evening dinner buffet, numerous bucket raffles, as well as a silent and live auction.  Items vary from a Baxter House Outfitters guided wading trip on the Beaverkill River or Willowemoc Creek, a Thomas and Thomas Vector 5wt travel rod, other fly fishing rods and gear, fresh and salt water flies, Bass Pro Gift Cards, movie tickets, gift certificates for therapeutic massage plus many items donated by our membership.  Tickets are $35.00 and can be purchased at the door.  For information or to donate auction items contact Susan Estabrook at 401.848.1070.

The Rhode Island Department of Environmental Management (DEM) reminds anglers that the freshwater fishing season runs from March 1 through February 28.  Regardless of when they were purchased, recreational freshwater fishing licenses for the 2018 season will expire on February 28, 2019.  Licenses for the 2019 season are available online  at www.dem.ri/gov and will be valid from March 2019 through February 2020.

The recreational saltwater fishing season runs on a calendar-year basis, visit www.dem.ri.gov in Rhode Island and in Massachusetts visit https://www.mass.gov/massfishhunt-buy-fishing-or-hunting-licenses .

Freshwater fishing.  Neil Hayes of Quaker Lane Bait & Tackle, North Kingstown said, “With most of the ice melted things have slowed down. In this area anglers were targeting pike, largemouth bass and trout in the ponds that were stocked by DEM.”  John Littlefield of Archie’s Bait & Tackle Riverside, said, “I’ve had my best winters for business in a long time.  Sold a lot of shiners to anglers ice fishing in northern parts of Rhode Island and Massachusetts.  This week in addition to shiners I had some blue gills that were about six inches and some small catfish.  Those were the first to go as anglers were buying them to target pike.”  Opening Day for the freshwater season is April 13 this year (always the second Saturday in April).  Anglers (even saltwater anglers) use opening day as the official start of the fishing season.  The States of Massachusetts and Rhode Island will be stocking trout in preparation for Opening Day sometime in late March/early April.

Cod fishing was good last week, the best it has been since the New Year. Capt. Frank Blount of the Frances Fleet said, “We did manage to get out a few times last week and are happy to report some of the best action we have seen in weeks. We fished on Sunday close to Block Island and found a few small fish but nothing really to work on. Captain Mike decided to take a ride out to the deep water. We found some nice cod waiting with open mouths. The weather was so nice we were able to power drift to stay right on top of the fish. We then were able to make it out on the following Saturday. We found some nice market cod to work on with quite a few shorts in the mix.”  Party boats sailing for cod this time of year includes the Frances Fleet at www.francesfleet.com , the Seven B’s at www.sevenbs.com, and the Island Current at www.islandcurrent.com .

Posted by Captain Dave Monti at 10:27 AM