How to catch larger fluke 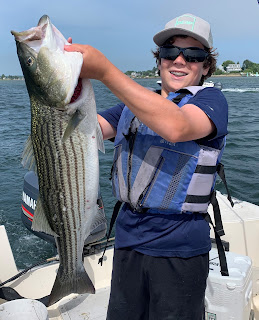 Winning bass: Jude Monti of Warwick with the 14.5 pound striped bass that took first place in the Youth Division of the ‘Fishing for Fibromyalgia Striped Bass Tournament'. 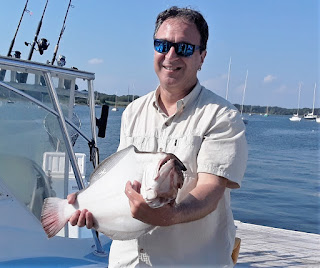 No Fluke:  Steve Brustein of West Warwick with a 26” fluke he caught Sunday coming out of the deep water trench at Austin Hollow, Jamestown.

How to catch larger fluke

Mike Cardinal of Misquamicut Bait & Tackle said, “Fluke fishing along the southern coastal shore is tough, anglers are catching plenty of small fish but not a lot of keepers.  It’s about 30 shorts to one keeper.”  Michael Callahan of Red Top Sporting Goods, Buzzards Bay said, “Fluke fishing has been difficult in Buzzards Bay but things are improving a bit for anglers with larger fish.”

Most all of the large fluke we have caught on my charter boat have been on edges or in deeper water this time of year.  Summer flounder look into the current to ambush bait fish, and the larger ones like to use edges for cover.  What I mean by edges is bottom structure such as reefs, channel edges, flat areas at the foot of jetties, open sandy spaces between bottom structure, the edges of underwater valleys, etc.

Another important factor is water movement.  When water is warm in August fish often can be found in deeper water and/or water that is moving and tossing around bait such as bridge abutments, jetty and channel edges, etc.

I also like to use a large bait to catch larger fluke and often tip my squid rig with squid, silversides or spearing and often add a piece of fluke belly.  I do not catch as many fish with this rig but the fish we do catch are larger.

Search ‘larger fluke’ when you visit my blog at www.noflukefishing.blogspot.com for tips from the experts on how to catch larger fluke.

Favorite Places to catch fluke
• Channel breaks in and around Warwick Neck light
• Channel breaks and edges around the Jamestown and Newport bridges
• Drop off areas on the North West corner of Dutch Island
• Underwater valley off the southeast side of Dutch Island
• Areas off URI’s Bay Campus
• Austin’s Hollow (an underwater valley) off the west side of Jamestown
• Beavertail in deep water off the west side
• Southern Rhode Island coastal beaches… Watch Hill, Charlestown, in front of the five cottages, etc.
• The center wall of the Harbor of Refuge
• Newport at any number of deep water brakes off Seal Ledge and Brenton Reef, often 80’ of water
• At the mouth of Hull and Mackerel Coves off Jamestown at the drop-offs
• Off Block Island… the North Rip, Cow Cove on the north end, along the State beach on the east side, the south side of the Island in and around the wind farm area, the East Grounds, three miles off Block Island

Jenn Monti, Jude Monti’s mother said, “My husband (Jimmy) signed Jude up at the last minute when they were buying bait that Friday.  He was so excited to win. There is nothing he would rather win a trophy for!”  Richard Geldard said, “We had 24 entries, a good start for a tournament we plan to hold annually.”

Summer flounder (fluke) fishing remained mixed this week with some large fish being taken but anglers had to work for them.  Capt. Frank Blount of the Frances Fleet said, “The fluke fishing has really been a toss of the coin, good fishing one drift and then nothing on the next. The beginning of the week saw the best action with fluke to 10 pounds.”  On Sunday Steve Brustein of West Warwick caught a 26” fluke on the north end of Austin Hollow, Jamestown coming out of the 70 foot trench in 38 feet of water. Tom Giddings of the Tackle Box, Warwick said, “We had a 25” fish caught off Prudence Island last weekend.”  Mike Cardinal of Misquamicut Bait & Tackle said, “Fluke fishing along the southern coastal shores is tough, anglers are catching plenty of small fish but not a lot of keepers.  It’s about 30 shorts to one keeper.”

Striped bass fishing has been mixed.  Many reports of school bass in lower Narragansett Bay area with keepers mixed in.  “We weighed in a 25 and a 28 pound striped bass this weekend caught in the Gould Island to Prudence Island area.” said John Littlefield of Archie’s Bait & Tackle, Riverside.  Tom Giddings of the Tackle Box, Warwick, said, “This weekend we had customers travel to Block Island and caught no bass, yet when they returned to Narragansett Bay they hooked up with school bass (some keepers mixed in) at the Jamestown Bridge.  Fishing at Block Island has been good.  Mike Cardinal of Misquamicut Bait & Tackle said, “They are hooking up with many large fish, almost too many in my book. Fishing from shore, particularly at the breachways has been good.  A lot of school bass with keepers mixed in.”  Neil Hayes of Quaker Lane Bait & Tackle said, “Striped bass fishing at Block Island is very good.  Anglers continue to catch fish at night and during the day with eels and on the troll as well.  Shore anglers are catching keeper striped bass too with Brenton Reef yielding fish but nothing like Block Island.”

“Freshwater fishing customers are crushing it.” said Tom Giddings of the Tackle Box.  “The largemouth bass bite has been very good.  Anglers are finding success with top water lures early morning and at dusk, and are fishing a bit deeper during the day when water is warm.” said Giddings.  Neil Hayes of Quaker Lane said, “The small and largemouth bass bite has been very good.  Indian Lake (South Kingstown) is yielding fish for customers.” John Littlefield said, “We weighted in a 5.5 pound largemouth last week.”