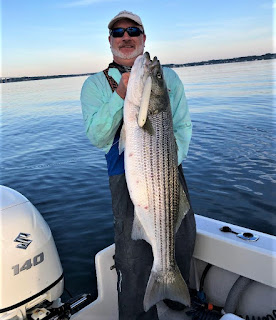 Greg Vespe, Portsmouth with a striped bass he caught at sunrise in the Ft. Adams, Newport area.  Greg said he hooked the fish with a spook steeple white floating lure. 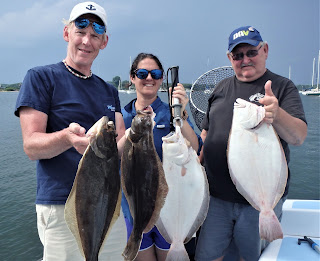 Bill Bradley, Erica O’Connell and Ray Ludvigson all members of the RI Saltwater Anglers with some of the summer flounder they caught earlier this week in the West Passage of Narragansett Bay. 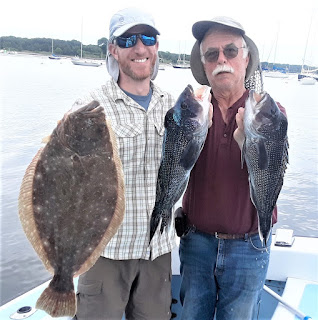 
Greg Vespe, president of the Aquidneck Island Striper Team and RI Saltwater Anglers Association (RISAA) board member, said, “The bass are  beginning to drop out of Narragansett Bay for the next couple of weeks, so I recommend targeting the points and outcroppings near the mouth of Bay which was where I had success this week with striped bass.”


Greg has caught a number of striped bass this time of year at places like the Ft. Adams, Newport area. “Bass are transitioning so it’s hard to target them as they are moving around a lot as the head out... so that’s why I like the points in the lower bay both east and west passage and the Sakonnet River. All the points to me offer the bass a staging and feeding area to stop at as they pass through.”


“The dropping east tide brought striped from Buzzards Bay into the Cape Cod Canal.” said East End Eddie Doherty.  Doherty is a Cape Cod Canal fishing expert and author. “Some nice fish were caught Monday including several 30 pounders and a 48 pound monster.  Wednesday morning I caught a 31 and a 35 inch striped bass.  I was using a five once Hurley olive/white rat tail on the dropping tide.” said Doherty.


The black sea bass season opened last week (June 24) in Rhode Island and anglers are hooking up with them.  Tom Giddings of the Tackle Box, Warwick said, “Large sea bass are being caught off Beavertail and south. I mean nice fish with large humps on their heads.”


The summer flounder (fluke) bite picked up Saturday as the drift was not just good at Block Island and in the Bay earlier in the week. Elisa Cahill of Snug Harbor Marina, South Kingstown said, “The fluke bite improved last week, Roger and Sue Lemma hooked up with their fluke limit quickly fishing off the Center Wall of the Harbor of Refuge with fish in the 20” to 25” range.”


I fished with Erica O’Donnell, Bill Bradley and Ray Ludvigson in the West Passage and they picked up five nice keeper fluke to 24”, eight sea bass to 23” and ten scup in three and a half hours of fishing. Later this week the same area yielded a 26” fluke for West Philadelphia, PA resident Michael Garmisa.


Here are some fluke fishing tips I like to remind myself of when planning a trip.


•       Wind and tide should be in line as you want to drag (or drift) over the front of the fish, as they set-up looking into the current, this way it sees your bait, drift over the back of the fish and it may never see your bait.


•       Match the hatch tipping with squid, bluefish, bass, silversides, mummies, minnows.  Often times whatever we catch (or seems to be in the water where we are fishing) I will cut up and strip for the fluke rigs.


•       Trailer teasers work, my largest fish have been caught with the trailer stinger bucktails


•       Find the fish, repeat pattern… noting both location and depth.


• Power drift perpendicular when wind and tide not ideal


Striped bass.  Atlantic menhaden enhanced their appearance in the Providence River this week.  Tom Giddings from the Tackle Box, Warwick said, “Anglers are now using pogies as they can be found in the river, however, anglers fishing with eels at night are landing bass in the 30” to 45” range. And, the bluefish bite in the Bay has been very good.”  John Littlefield of Archie’s Bait & Tackle, Riverside said, “We have had a few customers catching 36” and 38” fish in the Providence Rover using clam tongue and pogies.  Commercial customers fishing Block Island at night are catching their limit of five fish using eels at night.  But it has often been a slow bite.” Elisa Cahill of Sung Harbor Marina, South Kingstown said, “Surf fishermen are catching smaller bass with keepers mixed in. And, some anglers fishing from the West and off the Center Walls of the Harbor of Refuge are catching bonito.  Some are pretty good size.  The day bass bite at the North Rip and the Southwest Ledge is yielding smaller fish with the night bite on eels yielding 40 to 50 pound fish.”


Summer flounder (fluke) fishing improved greatly once the wind and tide started to work together Saturday.  I found the bite in the West Passage very good when there was a good drift.  Elisa Cahill said, “A customer caught a 10.9 fish from the beach last week, and when the dog fish are not around the wind farm and the east grounds are yielding fish.”  Cahill reports cod at the East Grounds and Sharks Ledge as well.  “Customers are catching fluke off Warwick Light and Warwick County Club as well as off Quonset Point.” said Tom Giddings of the Tackle Box. John Littlefield of Archie’s Bait said, “The fluke bite off Newport has not been good, however, last week the balck sea bass bite was good with anglers catching decent size fish.”  Doug Wade of Watch Hill Outfitters said Thursday, “Fluke along the coastal shore are being caught but it is spotty, there are six pound fish but the larger ones are at Block Island.  We weighed in a 12 pound 11 once fluke caught there earlier this week.”


Black sea bass/scup.  Black sea bass fishing opened June 24 and the season has gotten off to a great start with anglers catching their limit of three fish/person/day.  Most are catching them when fluke fishing with squid.  Doug Wade of Watch Hill said, “Sea bass are kicking in with some nice fish being caught along the coastal shore.”  Littlefield of Archie’s said, “Scup fishing has improved 100 fold in the Bay.  Anglers are catching their limit at Sabin Point, Colt State Park and at the white church bridge, Barrington.”


Offshore.  Hans Lugus of the fishing vessel Twister caught a 325 pound thresher shark Friday.  Elisa Cahill of Snug Harbor Marine said, “Shark fishing is on.  Just in time for our Shark Tournament July 6 and 7. Visit www.snugharbormarina.com for details.
Posted by Captain Dave Monti at 9:11 AM