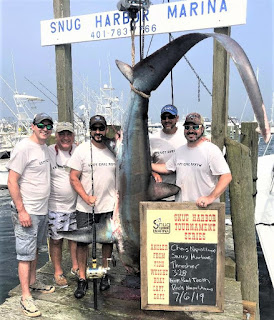 “The thresher shark picked up our squid and ran with it.  That first run was spectacular. We fought the shark for an hour and forty-five minutes.” said Richard Napolitano recounting the battle for the fish that took first place in the 38th Annual Snug Harbor Shark Tournament.

Napolitano was quick to point out that his sport fishing vessel, ‘Knot Reel Teeth’ successfully caught, tagged and released five other mako and blue sharks during the Tournament… as they normally do as it serves as a great data resource for fish mangers when managing sharks.

“We had just moved the boat to a new location, put out two rods and as soon as we put out the third with squid… that’s when the 328 pound mako hit. We chased it around a bit and then the shark sounded and we had to get it up.  We finally circled the fish with Chris (Napolitano) putting on the pressure by pumping and reeling, pumping and reeling, trying to disrupt the fish.  Finally the fish turned on its side and came up.”
“My son Chris did a great job on the fish, son Ryan orchestrated the whole think from the cockpit while I has at the helm.  We also had two other crew that did a great job helping to harpoon and tail tie the fish… hats off to Jim DeAngelo and Matthew Charland for their great work.” said Napolitano.
Elisa Cahill of Snug Harbor Marina said, “Jim Sansaua took second place in the Tournament with a 230 pound thresher.  Both fish were caught on Saturday, July 6. The tournament kicked off on July 6 at 5:00 a.m. and concluded at 5:00 p.m. on Sunday, July 7 with a cookout.”  Twenty-five vessels participated in the Tournament.
“Proceeds from the tournament go the Rhode Island Saltwater Anglers Association and the Recreational Fishing Alliance.” said Cahill.

New cod and haddock regulations
NOAA Fisheries Greater Atlantic Regional office announced changes to cod and haddock recreational regulations last week.
First, the 2019 Gulf of Maine cod and haddock recreational regulations have changed.  The Gulf of Maine cod season will open September 15 to 30 with a one fish/person/day limit, minimum size is 21 inches (NOAA is not opening an April season for Gulf of Maine cod).
The haddock season is May 1 to February 28/29 and April 15 to 30 with a 15 fish/person/day limit (this limit has been liberalized, the 2018 limit was 12 fish), the minimum haddock size is 17 inches.
Georges Bank cod regulations (which govern fishing off Rhode Island) have also changed.  The minimum size in 2019 will be 21”, this is a liberalization as last year the minimum size was 22”.  The possession limit has not changed, it is 10 fish/person/day.
For more information on recreational rules on these and other species in Federal waters visit https://www.fisheries.noaa.gov/new-england-mid-atlantic .
Where’s the bite?
Striped bass fishing has moved out of the Narragansett Bay.  Tom Giddings of the Tackle Box, Warwick said, “The bass bite in the Providence River slowed this week with not many fish being taken.” Dave Henault of Ocean State Tackle, Providence, said, “Any bass of size are being taken south of the bridges, out in front of Newport, along the  coastal shore and out at Block Island where the bite is occurring from 12:00 a.m. to 4:00 a.m. on eels.”  Bruce Miller of Canal Bait & Tackle, Sagamore, said, “The bass bite on the Canal has been OK this week but not as good as last week.  Anglers are still hooking up with 30 to 40 pound fish using jigs on the West Side of the Canal.” Elisa Cahill of Snug Harbor Marina, South Kingstown, said, “The bass at Block Island are not as large as they were but there is a pretty good bite at night on the southwest ledge with eels.  Fish are also being caught by anglers trolling wire on the southwest ledge and the north rip during the day but they are not as large.”
Black sea bass/summer flounder.  Bruce Miller of Canal Bait said, “The fluke and black sea bass bite has been very good with anglers staying inside or fishing Cleveland Ledge where the bite has been outstanding.”  Anglers continue to hook up with fluke around the Jamestown and Newport bridges with some finding fish out in front along the coastal shore. “Fluke fishing at Block Island is pretty good.” said Henault of Ocean State.  “Nice fluke have been taken around Warwick Light as the fish seem to have held there.  We also have customers catching fish in the low 20 inch range south of the Jamestown Bridge. And, customers continue to catch large black sea bass off Beavertail Point.” said Giddings of the Tackle Box. Earlier this week the dog fish were pretty bad south of Block Island said Elisa Cahill of Snug Harbor Marina.  Capt. Frank Blount of the Frances Fleet said, “The morning fishing trips have been on the slower side so we have been focusing on the sea bass. Most days anglers are all leaving with limits of big knob heads to 5 pounds.  Biggest fluke of the week was 12.5 pounds! We have seen double digit fluke at least once a week for the past month.”
Scup fishing continues to be very good just about anywhere there is structure and water movement. John from Archie’s Bait & Tackle, Riverside, said, “Scup are being taken everywhere in the Bay. Anglers are still catching scup at the white church bridge in Barrington.” Tom Giddings said, “Many customers have said the scup have been larger than ever before. They are also catching more sea robins and dogfish than ever before from shore at Conimicut Point”  “Ethan, one of our associates at Ocean State, caught scup to 17” from Goat Island, Newport. Anglers are also catching scup under the Mt. Hope Bridge, at Colt State Park and at Rocky Point.”
Offshore.  A report from noted offshore angler Richard Pastore. “We headed out at 5:30 a.m. from Wickford on Wednesday to Tuna Ridge and the temperature break we saw (on satellite). At Tuna Ridge temperature change went from 69 to almost 73 in a couple of miles. Flat seas, no bait and a few birds. Set in about 7 AM heading south towards NW corner of the Dump. We put out black squid and brown squid splash bars on the outside tracks about 150' back in the outriggers. Inside lines were a black and blue Islander with a Ballyhoo and green machine daisy chain with a bird leading the way. Twenty minutes out the brown spreader bar explodes and almost tears the outrigger off the boat. The fish came out of nowhere. The fish dumps about half of a spool of a 50 wide Penn reel until my son Joseph finally slows him down. 10 minutes later fish is pin wheeling next to the boat. We gaffed the fish, a fifty pound real fat bluefin tuna loaded with squid.”
Freshwater.  No major trout fishing or bite reported.  All the action is focused on largemouth bass with anglers using medium to large shiners to hook up.  Dave Henault of Ocean State Tackle said, “The largemouth bass are in post spawn now and customers are catching them at Stump Pond, Smithfield; the Turner Reservoir, East Providence and at Onley Pond, Lincoln Woods.”  Giddings of the Tackle Box said, “Freshwater fishing continues to be fantastic for customers.  Largemouth bass, white perch and carp at Roger Williams Park all continue to be good.  Customers are hooking up with bass at Carbuncle Pond, Coventry; Warwick Pond and Onley Pond, Lincoln.”

Posted by Captain Dave Monti at 9:48 AM