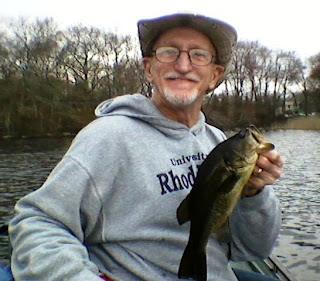 Dayton Martin with one of twelve largemouth bass that he and his fishing partner Kim Bissonnette caught in South County last week. The freshwater bass and trout bite is good in Rhode Island ponds, lakes and rivers as the water warms up and fish start to move around. 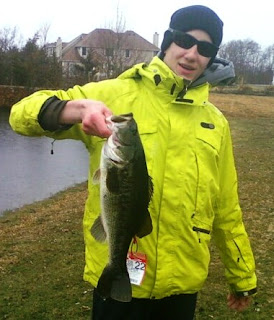 Chris Catucci, the Junior Bass Fishing World Champion, with a bass he caught in a private pond in Warwick, RI using crank bait. Chris has also had good luck this spring catching bass on jigs.

Kim said, “The recent warm weather is causing the fish to move into predicable spawning areas and the pre-spawn bite is really beginning to pick up as fish are becoming more aggressive. Target back ends of coves and flats along weed edges and grass lines, as well as, rocks and stumps and pockets of emerging lily pads… fish are relating tight to cover.”
At press time, anglers fishing for striped bass are finding action very slow, even at the West Wall of the Harbor of Refuge where the striped bass bite usually first appears. Anglers reported a few fish have been caught, but the large influx of fish has not arrived yet.
We need a couple of warm days to warm the water to the mid fifties range to break things open and the forecasted temperatures for this week may do the trick. Warmer water brings more bait, followed by striped bass.
This week, poor weather kept anglers from trying their luck at tautog fishing. No reports of a major tautog bite yet. However, angler Rick Sustello reports catching his first tautog this past Sunday at the Jamestown Bridge. Rick said, “Water temps were 47 to 50 degrees with an outgoing tide. Within 20 minutes I had the first and only tog of the day, an 18.5" male on a half green crab on a bottom rig.” Tautog experts say the fish will soon be spawning in the rivers and coves. During spring spawn they may be caught along sandy/gravel beach areas in the Bay and prefer soft baits (clam worms and clams vs. green crabs).
Point Judith Pond and the Harbor of Refuge closed for winter flounder fishing
In addition to Narragansett Bay, Point Judith Pond, including the Harbor of Refuge, are closed to winter flounder fishing at all times. 12” minimum size, 2 fish/person daily limit, and two split seasons: April 24 to May 23, and September 25 to October 24.
Fluke University at Wood Boat and Motor this Sunday
Fluke University is being held this Sunday, May 1, 9:00 a.m. to 3:00 p.m. at Wood Boat and Motor, 3630 West Shore Road, Warwick, RI. Learn where, when and how to catch more fluke. Fluke experts include noted author Captain Jim White of White Ghost Charters, Captain Joe Pagano of Stuff It Charters, Bart Wagner of Little Rhody Tackle (makes custom fluke rigs and jigs) and Captain Dave Monti of No Fluke Charters and local fishing columnist. Cost for the entire day with lunch and snacks is $50. Call 401.730.4040 to reserve a spot.

Fishing can be dangerous for commercial and recreational anglers
According to the National Institute for Occupational Safety and Health, during 1992-2008, the average annual fatality rate for commercial fishermen was 128 deaths per 100,000 workers, compared to the average of four deaths per 100,000 workers for all U.S. occupations. NOAA is asking for public input on national guidelines that promote the safety of commercial and recreational fishermen in federal waters. You can view proposed rules and submit comments by July 20, 2011 via the Federal eRulemaking Portal at http://www.regulations.gov/ using the identifier “0648-BA74”, comments can also be faxed to 301-713-1193 or mailed to Debra Lambert at NOAA’s Fisheries Service, 1315 East-West Highway, Room 13403, Silver Spring, MD 20910.
Don’t forget to get your 2011 State of RI Saltwater Fishing License
The Department of Environmental Management (DEM) reminds anglers and spearfishers that a 2011 saltwater fishing license is needed to fish recreationally in saltwater. Just go to http://www.saltwater.ri.gov/ and have a driver’s license or state identification card handy, as well as your date of birth, address and phone number. Fishing licenses are required, but free, for Rhode Island residents over 65 and for active military personnel stationed in the state. For all others, the $7 fee ($10 for non-residents) is payable using a VISA, MasterCard or Discover card. You can immediately print your license. Licenses are also available a participating bait and tackle shops and sporting good stores. The federal registration is honored in Rhode Island water, but it now costs $15, and it is not honored by neighboring states. The license program provides a list of anglers that can be accurately surveyed to improve state-based assessments that will lead to fair and more effective management programs.
Posted by Captain Dave Monti at 12:35 PM