Where to fish opening day 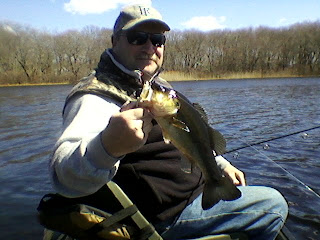 Kim Bissonnette of South Kingstown fished for bass in a small pond in Wakefield this past Sunday. Kim said, “We landed six bass in 6 to 10 feet of water using 5” stick baits and Carolina rings with 3x type floating lizards (June bugs).” Opening day for trout season in RI is this Saturday.

Where to fish opening day Opening day for the trout and general freshwater season is this Saturday. The official opening time is 6:00 a.m., but the ritual will start well before this time. Often it starts with fresh coffee on the banks of a Rhode Island pond well before sunrise, a camping trip the night before, or an early morning breakfast at home. Rhode Island ponds such as Silver Spring Lake in North Kingstown will take on a festival atmosphere with tents, campers, outdoor eating and lots of anglers of all ages. If you should have the desire to participate in the ritual it does not take a lot of effort and it will create some nice memories. Ponds being stocked The Department of Environmental Management’s (DEM) Division of Fish & Wildlife announced that more than 20,000 anglers are expected to turn out at dawn on opening day. Approximately 80,000 hatchery raised brook, brown, and rainbow trout with an average individual weight of one and a half pounds are being stocked by Division staff in more than 100 ponds and streams for opening day (visit www.dem.ri.gov for a complete listing). Popular ponds that have been stocked by DEM prior to opening day include: Barber Pond, South Kingstown; Carbuncle Pond, Coventry; Chickasheen Brook, South Kingstown; Frenchtown Park Pond, East Greenwich; Hunt River, East Greenwich and No. Kingstown; J.L. Curran Reservoir, Cranston; Meshanticut Brook, Cranston; Moosup River, Coventry; Pawcatuck River in several towns; Seidel’s Pond, Cranston; Silver Spring Lake, North Kingstown; Tiogue Lake, Coventry; Tiverton Trout Pond, Tiverton; Tucker Pond South Kingstown. Several ponds on opening day are restricted to children 14 years of age and younger. Visit DEM’s web site (www.dem.ri.gov) for a listing Where to get a fresh water license and trout stamp A 2011 fishing license is required for anglers 15 years of age and older wishing to catch fish. A Trout Conservation Stamp is also required of anyone wishing to keep or possess a trout or to fish in a catch-and-release or 'fly-fishing only' area. Fishing licenses and the Trout Conservation Stamp ($5.50) can be obtained at any city or town clerk's office or authorized agent such as bait and tackle shops and Benny’s. A current list of license vendors is available on the DEM website, www.dem.ri.gov. Licenses may also be purchase on line or obtained at DEM’s Boat Registration and Licensing Office located at 235 Promenade Street in Providence. License fees remain at $18 for Rhode Island residents and current members of the Armed Forces, $33 for a combination hunting and fishing license, $35 for non-residents, and $16 for a tourist three-consecutive-day license. Anglers over 65 must have a license, which for them is free, but do not need a trout stamp.

Striped bass regulations may change for 2012 The Atlantic States Marine Fisheries Commission’s (ASMFC) Atlantic Striped Bass Management Board has initiated development of Draft Addendum III with the goals of reducing striped bass fishing mortality up to 40% and further protecting spawning stock when it is concentrated and vulnerable. The addendum was initiated in order to allow managers to promptly respond to the results of the stock assessment update in the fall if necessary. Provisions of the addendum, if passed, could be implemented prior to the start of the 2012 fishing year. ASMFC cited a 66% decline in estimated recreational catch from 2006 to 2009, a 25% decline in striped bass abundance from 2004 to 2008, and lowered recruitment (fewer young fish) in recent years. Diminished water quality in the Chesapeake Bay during summer months that can contribute to increase mycobacteriosis in striped bass was also cited. A variety of fishing management measures including a change in bag limits and minimum size will be considered if stock assessment data in the fall indicates adjustments should be made to enhance the fishery. Tautog fishery down, more conservative regulations warranted At an ASMFC Tautog Board meeting on March 25, the committee determined that tautog overfishing has occurred since 2005. These findings and the remaining information contained in the 2011 assessment update were approved by the Board for management use. In order to end overfishing and initiate stock rebuilding, the committee approved Addendum VI which requires states to implement measures to achieve a 56% reduction in exploitation by January 1, 2012. The Technical Committee recommended implementing the target at 0.15 or lower to stop overfishing and improve chances of rebuilding. Tautog’s slow growth rate, late maturity, and spawning behavior makes it particularly susceptible to overfishing and limits stock rebuilding. Rick Bellavance, president of the Rhode Island Party and Charter Boat Association and a member of the Rhode Island Marine Fisheries Council, represented Rhode Island at the ASMFC meeting. Captain Bellavance said, “We are likely to see stiffening of tautog regulations in Rhode Island due to the Tautog committee’s decision.” A two month hiatus in the summer (rather than one month) is likely this season. Additionally, a reduced fall bag limit to six fish/angler/day (rather than eight) is likely. A ten fish per boat maximum catch (like last year) is likely to occur as well. Rhode Island DEM director is expected to announced tautog and other saltwater species fishing regulations in the next week or two. Rhody Fly Rodders presentation on South County worm hatch Capt. Bob Hines will speak about the worm hatch in South County estuaries at the Tuesday, April 19 Rhody Fly Rodders meeting. Meetings start with “Tying Time” at 6:30 p.m. and a 7:30 p.m. meeting. Meetings are held at the Riverside Sportsman’s Club, East Providence, RI. Visit www.rhodyflyrodders.com for details.

Where’s the bite Freshwater season officially starts this Saturday on opening day. Kim Bissonnette and his friend Dayton Martin (both from South County) fished a small local pond in Wakefield Sunday. Kim said, “The fish have not moved into the shallows yet, but we did find some active fish in deeper water adjacent to flats. We landed six bass… This early, and the conditions as they were (cold and windy), the best way to find some fish is low and slow.” Cod fishing is still good and crowds are small, so now is the time to give it try. Weather prohibited boats from fishing part of last week. Best bets for fishing include the Seven B’s at www.sevenbs.com and the Francis Fleet at www.francisfleet.com both out of Galilee Rhode Island. Bait Fish. Angler Peter Nilsen reports his friend Alan Libby, a fish biologist with RI Fish & Wildlife, reports that the herring (or Alewives) are in along South County streams. This is very good news as the spring run of striped bass cannot be far behind.

Posted by Captain Dave Monti at 7:22 AM