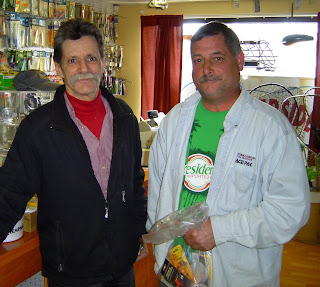 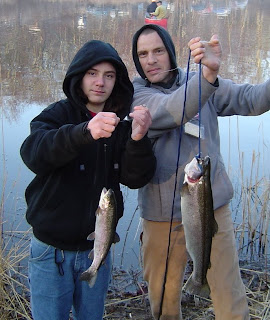 James Rothermel (right) of Warwick, RI with the 20”, four plus pound, rainbow trout he caught at 6:10 a.m. this past Saturday in South County on opening Day. Aaron Casey (left) had just landed his rainbow trout when this photo was taken.

Opening day of the trout season this past Saturday was great. The Department of Environmental Management’s (DEM) Division of Fish & Wildlife did an outstanding job stocking trout in lakes and ponds. Although DEM said fish averaged 1.5 pounds, several anglers commented on how large the fish were. James Rothermel of Warwick, RI landed a 20”, four plus pound, rainbow trout at Silver Spring Lake in South County. Rothermel said, “It’s one of the largest trout I’ve caught. It took a while to bring in and once I saw it, I couldn’t believe my eyes. It started to flop around on shore and headed back to the water. I got wet as I stepped into the lake to save it, but it was worth it.”
According to DEM, approximately 80,000 hatchery raised brook, brown, and rainbow trout were being stocked in more than 100 ponds and streams. Many anglers will continue to fish these ponds and lakes. Visit www.dem.ri.gov for a complete listing. Bait shops throughout the state reported a brisk business the day before and opening day itself. John Littlefield of Archie’s Bait & Tackle, East Providence (now at a new location at 292 Bullocks Point Avenue), said, “Business has been very good today. We sold a ton of shiners… other popular baits were meal worms and Power Baits.” I caught up with Wayne Eccleston of East Providence at 2 p.m. at Archie’s, “I thought I would avoid the madness and fish later in the day. I am very anxious to try these new Berkeley Power Baits. They were recommended by my friend who is a pro bass fisherman.”
Ken Ferrara of Ray’s Bait & Tackle, Warwick, said, “Popular baits this year are night crawlers, trout worms and giant meal worms. We sold a lot of special trout rigs with Gulp Powerbaits selling well too.”
John’s Bait & Tackle in North Kingstown was open all night. Owner John Wunner said, “Sales were good last night”. Steve Proctor an associate said, “Many local anglers were fishing Frenchtown Park Pound in East Greenwich. It was skipped last year but stocked this year.” Popular angler bait included Gulp Power Baits and John’s Special Trout rig.
The freshwater fishing season is just starting. If you are interested in fishing licenses and trout conservation stamps (you need both to fish for trout) they can be obtained at any city or town clerk's office, authorized agents such as bait and tackle shops, at Benny’s, DEM’s office or online at www.dem.ri.gov.
New saltwater fishing regulations for 2011 DEM announced new 2011 fishing regulations for select saltwater species late last week. Steve Medeiros, president of the Rhode Island Saltwater Anglers Association (RISAA) and a member of the Rhode Island Marine Fisheries Council, said DEM announced a closure of the black sea bass fishery until new regulations can be established. A public hearing on black sea bass will be held on April 18 said Medeiros. Regulations announced for fluke, winter flounder and tautog were as follows. Fluke (or summer flounder) Minimum size 18.5 inches, 7 fish daily bag limit, May 1 to December 31 is the season. Winter flounder** Minimum size 12 inches, 2 fish daily bag limit, split season…spring season April 24 to May 24, fall season Sept 24 to Oct 24. **NOTE-CLOSED: All of Narragansett Bay AND (new) all of Point Judith Pond and the Harbor of Refuge. Tautog (blackfish)* Minimum size 16 inches: seasons and bag limits… April 15 to May 31 - 3 fish per day, June 1 to July 31 – closed, August 1 to October 14 - 3 fish per day, October 15 to December 15 - 6 fish. *At all times while the fishery is open, a maximum of ten (10) fish per vessel per day. Party/charter boats this year have the same minimum sizes, daily bags and seasons as other recreational anglers, except that the 10 fish per boat limit does not apply. Bluefin tuna (BFT) public hearings Now is the time to express your thoughts on the bluefin fishery via public hearings being held on April 25, 2011, 6 to 9 p.m., Holiday Inn by the Bay, 88 Spring Street, Portland ,ME; and April 26, 2011, 6 to 9 p.m., Seaport Inn and Marina, 110 Middle Street, Fairhaven, MA. The National Marine Fisheries Service (NMFS) is taking two actions regarding the recreational Atlantic BFT fishery: (1) adjustment of the daily retention limit for the remainder of 2011, and (2) closure of the southern area trophy BFT fishery. Visit www.nmfs.noaa.gov/sfalhms/breaking news.htm to view the proposed rule and supporting documents. You may submit comments (identified by "0648-BA65") through April 28, 2011, by using anyone of the following methods: electronic comments via the Federal eRulemaking Portal http://www.regulations.gov; fax to 978-281-9340, Attn: Sarah McLaughlin; or mail Sarah McLaughlin, Highly Migratory Species Management Division, NMFS, 55 Great Republic Drive, Gloucester, MA 01930.

Bluefin Tuna “Weak” hooks in the Gulf of Mexico spawning grounds What a great idea, use “weak” hooks on long lines in The Gulf of Mexico spawning grounds so giant bluefin tuna can free themselves. NOAA’s Fisheries Service will require commercial fishermen who fish for yellowfin tuna, swordfish and other species with longlines in the Gulf of Mexico to use a new type of hook, called a weak hook, designed to reduce the incidental catch of Atlantic bluefin tuna. The weak hook is a circular hook constructed of thin gauge wire, and is designed to straighten when a large fish, such as bluefin tuna, is hooked, releasing it but holding on to smaller fish. The average size of bluefin tuna landed in the Gulf of Mexico longline fishery is 485 pounds, while the average for yellowfin tuna is about 86 pounds.
Where’s the bite Freshwater fishing bite has been good. Reports of bass moving into warmer water areas and anglers are reporting a strong trout bite on the over 100 Rhode Island ponds and lakes stocked by DEM.
Tautog season opens this Friday, April 15. See rules above.
Striped bass will soon arrive as the water warms. Good reports of herring. Craig Castro of Erickson’s Bait & Tackle, Warwick, said, “ For three weeks now, we have had thousands of herring in Little Gorton Pond which is behind our shop.” Bass cannot be far behind. Cod fishing bite still good reports Francis Fleet (Galilee, RI) party boat captains.

Posted by Captain Dave Monti at 9:46 AM