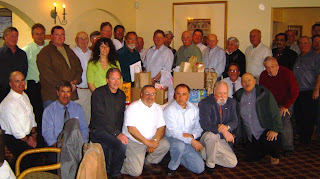 Members of the Rhode Island Party & Charter Boat Association recently donated 283.5 pounds of food and $100 to the Johnny Cake Food Pantry in South County. The funds and food were raised by guests and Captains of the association at their annual banquet which was held at Spain Restaurant in Narragansett.

Tautog season opened this past weekend with windy and stormy weather which deterred anglers from fishing. Craig Castro, Erickson’s Bait & Tackle, Warwick, RI said, “Conditions were horrible Saturday. Thet wind was blowing hard. One of my employees works for Sea Tow and saw boats on the water that shouldn’t be there.” John Littlefield at Archie’s Bait & Tackle, East Providence, RI said, ”I had a couple of customers that fished the wharves with worms and caught a couple of shorts but that’s it.” John Wunner of John’s Bait & Tackle, North Kingstown, RI, said, “I had no customers that went tautog fishing this weekend, the weather was terrible. But the fresh water business has been good. We sold a lot of minnows. Customers are doing well with bass in local ponds.”

The weather caused a slow start to the tautog season this past week. Bad weather on Saturday and Sunday prevented most from fishing. Tautog has been identified as an overfished species. Tougher regulations (see below) were put into effect last year and this year to help rebuild the fishery.

Steve Medeiros, president of the Rhode Island Saltwater Anglers Association (RISAA) and RI Marine Fisheries Council member, said, “Striped bass belong to all of the people in the state of Rhode Island… so poaching hurts us all… it is an outrage.” Medeiros continued, “Striped bass are worth about $100 each, yet fines for catching them illegally are only $25 per fish. We need tougher laws to deter poaching.”

Rick Bellavance, president of the Rhode Island Party and Charter Boat Association (RIPCBA) said, “The Rhode Island Party and Charter Boat Association supports tougher penalties for those taking striped bass illegally”. Chief Steven Hall of the Department of Environmental Management (DEM) Division of Law Enforcement said, “Some people are earning as much as $3,000 per weekend poaching striped bass from fishing grounds such as Block Island. We are advocating for enhanced penalties in part to deter poaching due to the lack of manpower. If poachers find their behavior profitable and know we might have difficulty enforcing the law due to manpower they are encouraged. Stiffer penalties will serve as a deterrent.” Chief Hall cited a Rhode Island poaching case last year where DEM law enforcement officers found eleven illegal striped bass in a secret compartment on an angler’s boat.

The DEM will hold a public hearing on proposed increases to fees for daily parking and season passes at state beaches on Friday, May 13. The 10 a.m. hearing will take place in Room 300 at DEM Headquarters, 235 Promenade Street in Providence. Rhode Island state beach fees were last raised in 2002.

The proposed increases will enable DEM to maintain current services at the state’s seven saltwater beaches in South County at a time when the state is facing severe budget constraints. The increased fees will generate $1.8 million for the state General Fund. The proposed rates are comparable to fees charged by similar private and municipal facilities and Connecticut state beaches.

On The Water magazine’s annual five month tournament, the “Striper Cup”, starts May 2, 2011. To sign up and get your free t-shirt, lure and commemorative pin, visit http://onthewater.com/Stripercuphome_2x.html. David Westfall, the RISAA “Striper Cup” team committee chairman said, “Last year, Team RISAA took second place in this tournament. This could be the year RISAA could win it!” Westfall continued to say to enter as a RISAA team member all an angler has to do is be a RISAA member in good standing. “Make sure you put RISAA on the team line.” said Westfall.

Menhaden: regulations prohibit commercial boats from fishing in the Providence River north of a line from Rocky Point, to Conimicut Light to Nayatt Point. East Greenwich Bay is also off limits to commercial menhaden boats.

Tautog: regulations include a shortened season (no fishing in June and July), a three fish limit for all fishing April 15 to May 31 and August 1 to October 15; a six fish limit from October 16 to December, 15; with a ten fish per boat limit for all season periods (does not apply to charter or party boats).

Striped bass: no change from last year… two fish at a minimum of 28”.

Winter flounder: 12” minimum size, 2 fish/person/day; split season April 24 to May 22 then September 24 to October 23. See DEM web site for complete list of closed areas. New this year a prohibition of possession of winter flounder in Point Judith Pond including the Harbor of Refuge.

This Monday, April 25 RISAA seminar will feature two great topics and speakers… refining the hunt for doormat fluke by Charley Soares and tautog fishing by captain John Sheriff. The meeting starts a 7:00 p.m. at the West Valley Inn, West Warwick, with an optional dinner served by the West Valley Inn staff from 5:30 p.m. to 6:30 p.m. RISAA members are admitted free (and this month, one of their guests can be admitted free too). Donation for non-members is $10.
Posted by Captain Dave Monti at 5:25 AM